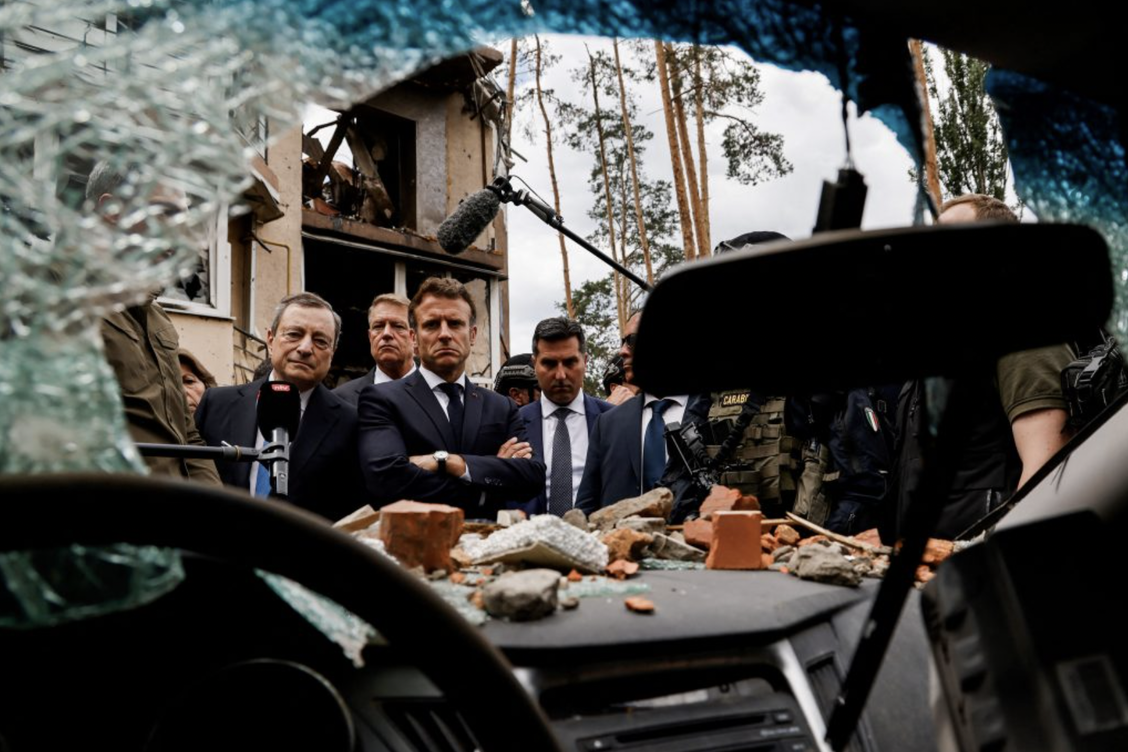 Dear readers, we are launching a new newsletter, Belarus Weekly, and you are the first to see it! To receive the Belarus Weekly newsletter in the future, subscribe via this link.

Danilov: President Zelensky calls for readiness checks in case of invasion from Belarus. National Security and Defense Council Secretary Oleksiy Danilov said that President Volodymyr Zelensky convened a meeting to assess the threat of further invasion from Belarus and asked for readiness checks in four areas. Danilov did not specify where exactly the checks would occur.

Ukrainian intelligence says it has detailed specs of Crimean Bridge linking peninsula with Russia. The Ukrainian Defense Ministry’s Intelligence Directorate reported that the obtained documents contain detailed technical information about the bridge. Earlier, Kremlin spokesman Dmitry Peskov guaranteed the security of the bridge. The bridge has been identified as a key target for Ukrainian forces as it is key for Russian logistics.

UK intelligence: Russian forces severely undermanned. Russia’s combat forces are operating in severely undermanned groupings, with some battalion tactical groups as small as 30 soldiers compared to the typical number of 600-800 personnel, the U.K. Defense Ministry said. The Ministry also said that Ukraine has probably withdrawn a large portion of its combat troops who were originally holding Sievierodonetsk, Luhansk Oblast. All the main bridges over the Siversky Donets River, which link Sievierodonetsk and Ukrainian-held territory, have likely been destroyed, the ministry said. As a result, Russia may have to conduct a contested river crossing or advance on its stalled flanks, according to the ministry.

Russian proxies say Zaporizhzhia nuclear power plant to be under Russian control starting Sept. 1. Ukraine’s state nuclear company Energoatom said, however, that the power plant will “continue to operate in the Ukrainian energy system and in accordance with Ukrainian legislation.” The power plant in Enerhodar has been occupied by Russian troops since March 4.

Culture Ministry: 3D printers document, aim to preserve Ukraine’s cultural heritage sites. In collaboration with experts from Latvia’s Culture Ministry and Riga Technical University, Ukrainian specialists scanned two heritage sites in Chernihiv Oblast damaged by Russian shelling and two sacred monuments in Lviv and Kyiv oblasts this week. The intention is to work towards preserving and restoring damaged sites. Since Feb. 24, around 400 instances of damage towards Ukrainian cultural heritage sites have been recorded.

UN: Nearly 2.5 million people have returned to Ukraine since end of Feb. The United Nations High Commissioner for Refugees has announced that over 2.5 million Ukrainians have returned to their home country since late February, while over 5 million of Ukrainians registered for temporary protection or similar national protection schemes in Europe as of June 14. At least 7.5 million people have left Ukraine due to Russia’s invasion, the agency said.

Reznikov says he sees ‘real progress’ in cooperation following meeting with his German, Dutch counterparts. Defense Minister Oleksii Reznikov said on June 16 that he had a working breakfast with Defense Ministers of Germany and the Netherlands, Christine Lambrecht and Kajsa Ollongren, at the third Remstein summit that brought together nearly 50 countries to discuss support for Ukraine.

Ukrainian forces beat back two Russian assaults toward Sloviansk, Bakhmut in Donetsk Oblast. Continuous artillery fire has been reported across much of the front line, along with airstrikes. The General Staff of Ukraine’s Armed Forces said that Russian losses are spoiling plans to push quickly into Ukraine.

French President Emmanuel Macron denies Ukraine will be asked to concede anything. Macron made the comment during a joint press conference in Kyiv on June 16. Last month, President Volodymyr Zelensky said that Macron asked him to make concessions concerning Ukraine’s sovereignty in an attempt to end the war. Macron has previously stated that Russia should not be “humiliated” and given “a way out.”

Read our exclusive, on the ground stories

Over the past several months Russia’s focus on capturing Sievierodonetsk has forced it to pull assets and attention from other positions of attack, giving Ukraine opportunities for tactical counterattacks. However, with just a tenth of western weapons delivered so far and artillery ammo a persistent problem, Ukrainians need to get military aid much faster if they are to fully capitalize on these opportunities. Read our story here.

UN: Civilian casualties due to Russia’s full-scale war exceed 10,000. According to the UN’s human rights agency, 4,481 civilians have been killed and 5,565 injured. However, the total figure is likely higher. The most civilian casualties are reported in Donbas, with 2,611 killed and 3,103 injured. Most casualties were reportedly the result of “explosive weapons with a wide impact area, including shelling from heavy artillery and multiple launch rocket systems, and missile and air strikes.”

Luhansk Oblast Governor: Russian airstrike kills at least 3, wounds 7 in Lysychansk. Russian troops hit a residential building where civilians were hiding, Serhiy Haidai reported on June 16. The rubble is now being cleared up at the site. According to the official, Russia already destroyed or damaged nearly 11,300 houses in Luhansk Oblast, including 3,188 high-rise buildings.

Prosecutor General’s Office: Russia’s war has killed at least 318 children, injured over 581 since Feb. 24. The figures are expected to be higher since they do not include casualties in areas where hostilities are ongoing and in Russian-occupied areas.

Governor: Russian missile attack on Sumy Oblast kills at least 4 people, injures 6. Dmytro Zhyvytsky said that a Russian missile hit the village of Sad overnight. Further information about the attack will be provided.

Macron: France, Germany, Italy, Romania in favor of immediately granting EU candidate status to Ukraine. French President Emmanuel Macron made the statement during his June 16 visit to Kyiv with other European leaders. French Minister for European Affairs Clement Beaune earlier said that he considers it necessary that Ukraine be granted its long-sought status of candidacy for EU membership.

Slovenia sends Ukraine 35 infantry fighting vehicles. This was announced by Slovenia’s Defense Minister Marjan Sarec on June 16 following a meeting of NATO defense ministers in Brussels, reports Slovenian media RTVSLO.si. Sarec did not specify what types of vehicles were donated. He said that, while the supply of weapons to Ukraine is currently underway, Slovenia has exhausted its available arsenal.

German media: Scholz promises further help for Ukraine. German Chancellor Olaf Scholz said that his country will continue providing financial and humanitarian aid, as well as weapons, to Ukraine as long as it is necessary for defending Ukraine’s independence, reports German newspaper Bild. Scholz has been criticized for blocking and delaying arms supplies to Ukraine, and Germany has not yet supplied any heavy weapons.

Macron: France to send 6 more Caesar self-propelled howitzers to Ukraine. French President Emmanuel Macron made the announcement during his June 16 visit to Kyiv. France has officially sent six 155 mm Caesar howitzers to Ukraine, which are already in use on the front line, but Macron said during his visit that 12 have been sent.

Coca-Cola to leave Russian market. The company said in a statement that it is depleting its stock in the country and will stop the production and sale of Coca-Cola or other brands of the company in Russia.

Sky News: UK to provide 20 155-millimeter M109 howitzers to Ukraine. British Defense Minister Ben Wallace said in an interview on June 16 that Ukraine’s artillery is outnumbered 20 to 1 by Russia’s.

Dutch secret service prevents Russian spy from working for ICC. According to the Dutch General Intelligence and Security Service, the alleged Russian spy, Sergey Cherkasov, who is linked to Russia’s military secret service, GRU, tried to become an intern for the International Criminal Court. Cherkasov was allegedly using the alias of Brazilian citizen Viktor Muller Ferreira.