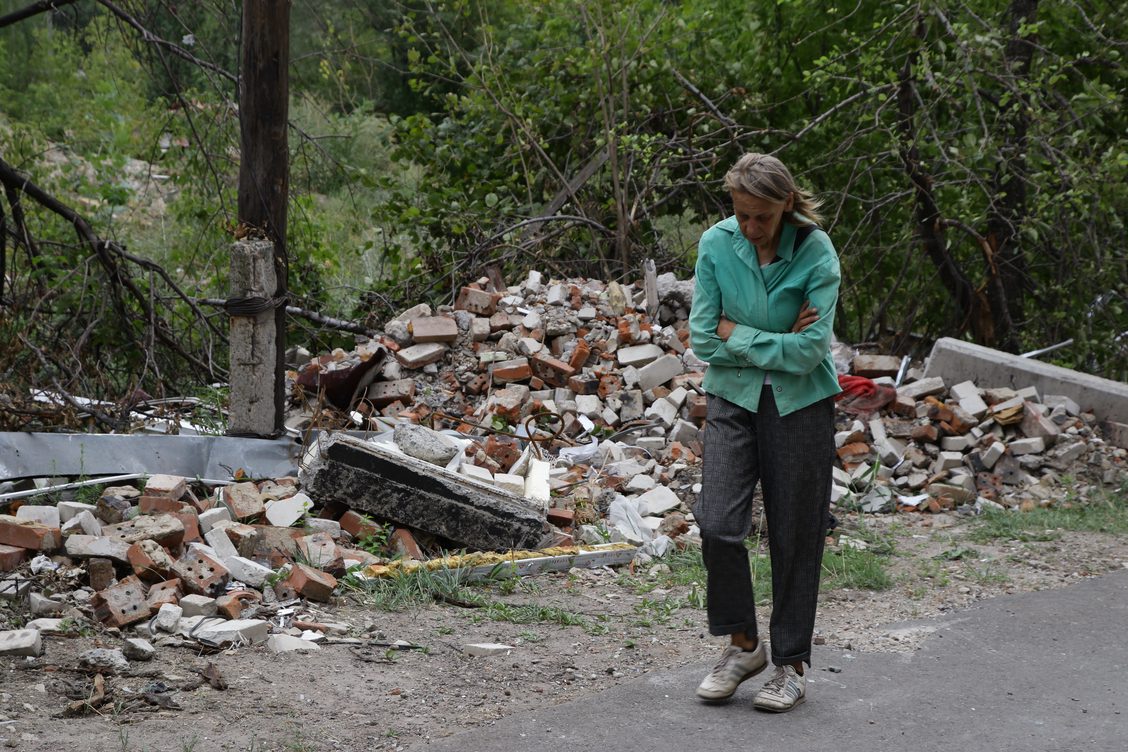 A woman walks past the rubble left after Russia bombarded Toretsk, Donetsk Oblast, on Aug. 26, 2022. (Stas Yurchenko / The Kyiv Independent)

Zelensky: Ukraine will return Russian-occupied areas of Donbas. President Volodymyr Zelensky said in a video address on this year’s National Miner’s Day that the Donbas, famous for its mining industry, had been almost destroyed by Russia. “Ukrainian Donetsk has been robbed and humiliated by the Russian occupation,” Zelensky said on Aug. 28. “But Ukraine will return (the region). It will be able to live safely and happily again.“

Kuleba: Russia turns Zaporizhzhia Nuclear Power Plant into military base. Ukraine’s Foreign Minister Dmytro Kuleba tweeted that Russian forces are putting the whole of Europe at risk by weaponising the Ukrainian nuclear plant that they seized in March.

Six more ships carrying Ukrainian grain depart Odesa. Turkey’s Defense Ministry said on Aug. 28 that the cargo ships have left the Black Sea port. Around 30 ships have left the largest Ukrainian ports in the Black Sea since Aug. 1 after Russia and Ukraine signed an agreement brokered by the United Nations and Turkey to allow grain exports to restart.

OCCRP: Russian oligarch Abramovich’s companies supply materials for Russian military. Organized Crime and Corruption Reporting Project (OCCRP) investigation shows Roman Abramovich’s steelmaker Evraz group may have supplied steel to the Russian military that could have been used to produce tanks. The contracts show they have supplied the National Guard as well as factories that supply the military and produce explosives.

Ukrainian Intelligence: Russia wants to mobilize about 90,000 troops. The Russian military is recruiting in each of the country’s military districts in order to make up for losses, according to Ukraine’s Defense Ministry Intelligence Directorate spokesman Vadym Skibitsky. Recruiters, however, are encountering significant recruiting issues as there are fewer and fewer applicants, especially in big cities where few want to serve, Skibitsky said.

Mayor: Town serving Zaporizhzhia nuclear plant shelled on Aug. 28. Dmytro Orlov, the mayor of Russian-occupied Enerhodar in Zaporizhzhia Oblast, said that explosions were reported late in the evening in the city, where Europe’s biggest nuclear power plant is located. As a result of the shelling, an apartment in a residential building and several cars parked nearby were damaged. Russia, which has been shelling Ukrainian positions from the territory of the Zaporizhzhia Nuclear Power Plant in Enerhodar, has been accused of using it as a shield and a tool of blackmail.

Official: Russian forces ‘reconstructing’ Mariupol drama theatre, potentially covering war crimes. Under the guise of reconstruction for “historical value,” the Russian forces are quickly rebuilding the theater, Petro Andriushchenko, the advisor to the Mariupol mayor, reports. According to Andriushchenko, the Russian forces are hiding evidence from when they bombed the theater on March 16, killing an estimated 300 people who were hiding and awaiting evacuation. On June 29, Amnesty International called the attack a “clear war crime.”

Schemes: Satellite images show Russian forces building pontoon bridge near Antonivsky bridge. Schemes, Radio Free Europe / Radio Liberty’s investigative journalism program in Ukraine, released photos of the floating bridge on Aug. 27. RFE/RL writes that the bridge could increase Russia’s capacity since Ukraine struck the key bridge from the east to the temporarily occupied parts of Kherson on July 27. However, British intelligence says this bridge will “most likely be vulnerable” to Ukrainian attacks. Earlier reports from military experts indicate that Russia has constructed other pontoon bridges across the Dnipro in Kherson Oblast.

Official: Russian shelling kills one, injures 2 people in Dnipropetrovsk Oblast. Mykola Lukashuk, the speaker of Dnipropetrovsk Oblast’s legislature, said that a 67-year-old woman was killed by a Russian attack on the city of Nikopol. One residential building was destroyed.

Prosecutor General’s Office: Russia’s war has killed at least 379 children, injured 733 since Feb. 24. The actual numbers are expected to be higher since the current count doesn’t include casualties in the Russian-occupied territories, near the front line, and in liberated territories, according to Ukraine’s Prosecutor General’s Office. The largest number of child casualties was recorded in Donetsk Oblast, where 388 children have either been killed or injured.

Borrell: EU unlikely to support visa ban for Russians. In an interview on Aug. 28 with Austrian TV channel ORF, EU foreign policy chief Josep Borrell said that EU foreign ministers will be unlikely to unanimously support the visa ban when they meet to discuss the matter later this week. Borrell repeated that he is against banning visas for all Russians, however, he is in favor of a more selective process.

Germany plans to nationalize local Gazprom subsidiary. According to German newspaper Die Welt, preparations for a possible nationalization of the former German subsidiary of the Russian state-owned company Gazprom are ongoing. Germany has allegedly set up a holding company behind closed doors in order to be able to carry out the nationalization in the short term, Die Welt reported.

Baerbock: Germany paid for Russian gas with its ‘security and independence.’ German Foreign Minister Annalena Baerbock told the German newspaper Bild that Germany had to “put an end to the self-deception that we ever received cheap gas from Russia.” “Ukrainians paid for it thousands of times with their lives,” she said. Baerbock also called gas pipelines “weapons in a hybrid war,” accusing Russian dictator Vladimir Putin of stopping the gas flow and being responsible for Russia’s war.