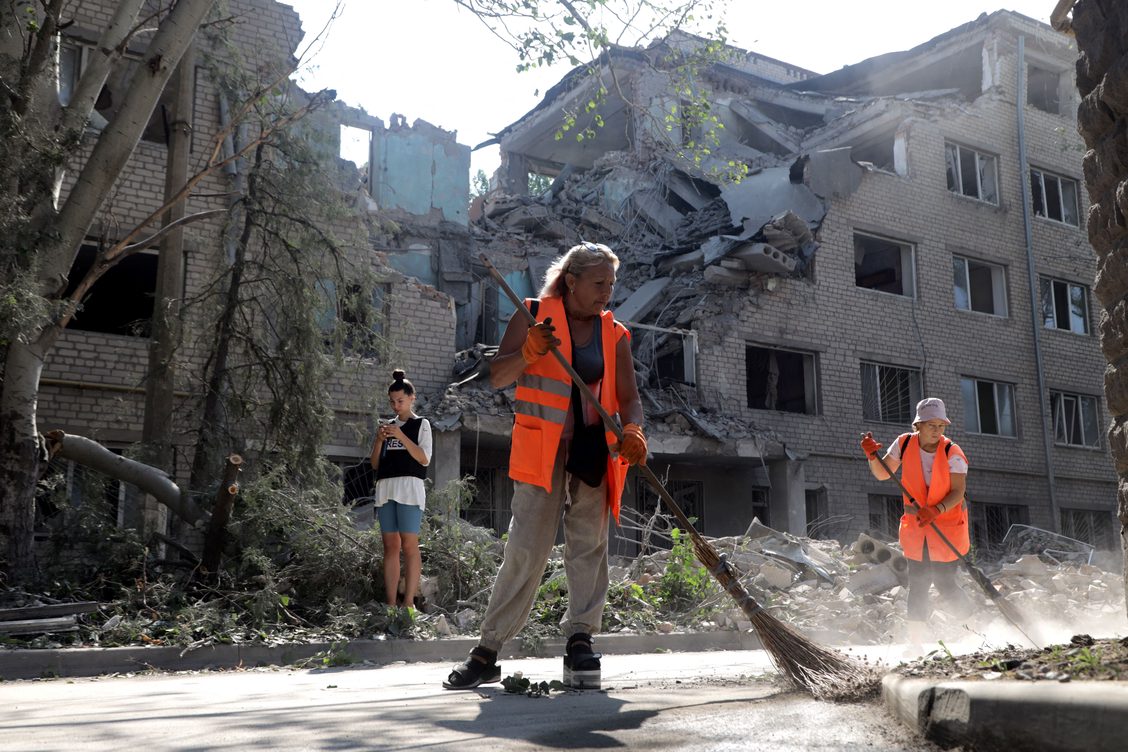 Communal workers clean outside a building destroyed as a result of Russian shelling in Mykolaiv on August 2, 2022, amid Russia’s invasion of Ukraine. (Photo by Oleksandr GIMANOV / AFP) (Photo by OLEKSANDR GIMANOV/AFP via Getty Images)

Mayor: HIMARS inflict heavy casualties on Russian troops in Melitopol. Melitopol Mayor Ivan Fedorov announced that Ukraine’s forces used HIMARS missiles to hit Russian military positions at industrial sites throughout the city overnight on Aug. 8. According to Fedorov, around 100 Russian soldiers were killed and a variety of military equipment was destroyed.

Deputy Mayor: Bakhmut under constant shelling but situation ’under control.’ The situation is worsening in the city of Bakhmut in Donetsk Oblast, an important target in the Kremlin’s goal of taking the entire Donbas region, according to Deputy Minister Oleksandr Marchenko. Three civilians were killed within the last 24 hours, and four houses were burned down, he said.

Pope Francis sees ‘sign of hope’ as first vessel with grain departs from Ukrainian Black Sea port. Pope Francis said at his weekly address in St. Peter’s Square that this “step shows that it is possible to conduct dialogue to reach concrete results.” “This event presents itself as a sign of hope and my own heartfelt wish is that following this path, it will be possible to bring an end to the fighting and reach a just and lasting peace,” he said. Ships loaded with grain began leaving Ukraine’s ports on Aug. 1 for the first time since Russia’s invasion after Kyiv and Moscow signed a deal backed by Turkey and the UN for the export of grain.

Russia lost over 5,000 units of military equipment since Feb. 24. The Russian military has lost about 5,083 units of equipment since the start of the invasion, according to the Oryx analytical project. Of those, at least 3,238 have been destroyed, 109 damaged, and 326 abandoned. Another 1,410 units were captured by Ukrainian forces. The information is collected using photo, video and other publicly available data. The experts believe that the actual figures of Russian lost equipment are considerably higher.

Wagner Group recruits over 1,000 Russian prisoners to fight in Ukraine. Recruiters have already visited at least 17 prisons in 10 regions in Russia to hire prisoners and deploy them to the front lines, according to Russian media. The first group was deployed to Ukraine on July 20. Prisoners were promised freedom after six months of fighting. The Wagner Group is a Russian-controlled mercenary group operating at the Kremlin’s request around the world through oligarch Yevgeny Prigozhin.

Putin allies use loophole in British law to bypass sanctions. Businessmen Arkady and Boris Rotenberg, close allies of Russian dictator Vladimir Putin, have created a company that is not legally required to disclose its beneficiaries, according to an investigation by the BBC and Finance Uncovered. In 2016 and 2017 in an effort to fight money laundering, the British government introduced new rules that required almost all UK companies to name their beneficial owners. However, limited partnerships are not subject to the new transparency rules. One of these partnerships, Sinara Company LP, sent 14 wire transfers totaling $133,000 to an art consultant who facilitated purchases for the Rotenbergs in 2017 and 2018, the BBC reported.

Institute for the Study of War: Russian military command undergoes high turnover, complicates combat effectiveness. The U.K. Ministry of Defense confirmed the think tank’s previous assesment that Russian military leadership has experienced major turn-overs due to Russian military failures in Ukraine. According to the experts, at least six Russian commanders have likely been dismissed from their posts since the beginning of the invasion in February, potentially including Eastern Military District commander Colonel General Aleksandr Chayko and Western Military District commander Colonel General Aleksandr Zhuravlev. Change in military leadership is likely impacting Russian command and control efforts in Ukraine.

Mayor: 132 civilians killed, 619 injured since Feb. 24 in Mykolaiv. Mykolaiv Mayor Oleksandr Sienkevych said among those killed is one child and among those injured are eight children. He states that Russian shelling and strikes have damaged over 500 residential buildings, and about 700 houses, causing $21 million worth of damage.

Russia’s war has killed over 1,000 civilians, including 50 children in Kharkiv Oblast. Over two thousand civilians have also been injured in the oblast since Feb. 24, according to Oleksandr Filchakov, head of the regional prosecutor’s office. Over 7,000 sites in the city and region, 2,800 apartment buildings, almost 1,800 residential buildings, more than 500 educational institutions, and 150 hospitals have been completely or partially destroyed, he said.

Amnesty International apologizes for ‘distress and anger’ its report about Ukraine caused. In an email to Reuters, the human rights organization said it regrets “the pain caused” by its report accusing Ukraine of endangering citizens, but “fully stands” by its findings. Amnesty International triggered a scandal by publishing a report on Aug. 4 claiming that Ukrainian troops are endangering civilians by deploying weapons in residential areas. The Times published an editorial saying that Amnesty International serves as a mouthpiece of Putin’s propaganda: **“**The human rights charity shamefully castigates the victims of Russian aggression,“ the Times said. Amnesty International has learned nothing after it helped the Kremlin in 2021 by stripping jailed Russian opposition leader Alexei Navalny of his status as a prisoner of conscience, the Times added.

Sweden to send instructors to UK to train Ukrainian forces. Swedish Defense Ministry said it will send up to 120 instructors for six months starting on Aug. 12 for military training. “It is extremely important that the world continues to support Ukraine in its struggle for sovereignty,” said Swedish Defense Minister Peter Hultqvist. In total, about 10,000 Ukrainians are expected to participate in the training in the U.K.