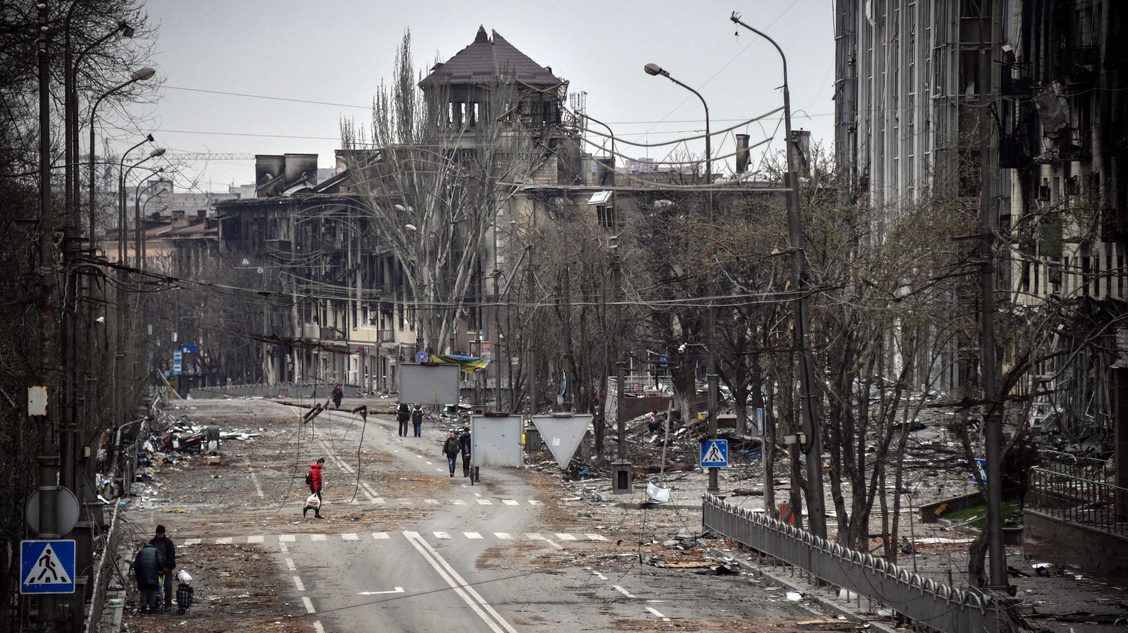 People walk down an avenue in Mariupol, Donetsk Oblast, on April 12, 2022. (Photo by Alexander Nemenov/AFP via Getty Images)

Pentagon: Ukraine attacked Saki air base in Crimea. The U.S. Defense Department confirmed in a statement that Ukrainian forces bombarded the Russian-controlled Saki air base in Crimea on Aug. 9. Russia claims no attack occurred and Ukraine has neither confirmed nor denied its participation. Earlier, the Pentagon stated that weapons provided by the U.S. were not used in the attack. Russian forces may still be able to use the Saki air base in Russian-occupied Crimea as the runway is not damaged, Ukraine’s Air Force spokesperson Yuri Ignat said in a televised address, reports Ukrainska Pravda.

RFE/RL: Russian proxies in Donetsk Oblast set ‘trial’ of foreign fighters in Ukraine for Aug. 15. Five foreigners fighting alongside Ukraine were captured and are accused of “being mercenaries, preparing for terrorist activities, and conducting activities aiming to seize power,” reports RFE/RL. The foreign fighters include Matias Gustavsson from Sweden, Vjekoslav Prebeg from Croatia, and John Harding, Andrew Hill, and Dylan Healy from the U.K. If deemed guilty, they will be given the death penalty.

Energoatom: Zaporizhzhia Nuclear Power Plant at “risk of violating radiation” safety standards. Ukraine’s state nuclear company said that Russian shelling of the plant last week and over ten “arrivals” close to a power unit at the plant “caused a serious risk to the safe operation of the plant.” As a result of the attacks, “the emergency protection on one of the power units was activated and one of the three operating power units is now disconnected,” Energoatom said. Russia seized control of the nuclear power plant, the largest in Europe, in early March and is using the site as a military base to launch attacks on Ukraine.

Belarus extends military drills near Ukraine’s borders. Belarus will extend its drills until Aug. 20, according to monitoring project Belarusian Gayun. Belarus earlier announced the renewed joint military drills with Russia that were supposed to be held from Aug. 9-11 in Belarus and from Aug. 22-25 in Russia. Moscow has been using Belarus’ territory to launch missiles at Ukraine since the beginning of the full-scale invasion on Feb. 24.

Ukraine’s Economy Ministry creates Economic Headquarters. Initiated by President Volodymyr Zelensky, the Economic Headquarters will be staffed with experts who will meet weekly to discuss ways to solve urgent economic issues, Ukraine’s Economy Ministry announced on Aug. 12. The Headquarters will be led by Economy Minister Yulia Svyrydenko and its focus will include facilitate business trips for commercial employees, streamlining the customs clearance process, stimulating agricultural business, establishing war risk insurance, and creating jobs for those unemployed due to the war.

Ukraine asks US to impose sanctions against all Russian banks. According to Oksana Markarova, Ukraine’s ambassador to the U.S., Kyiv wants the U.S. to add several banks a week to its list of sanctioned financial institutions, Bloomberg reported. The ambassador added that she had forwarded a request to the U.S. Treasury Department. “Sanctions are as important as weapons,” said Markarova.

Read & listen to our exclusives here

Russian heavy artillery — the Kremlin’s deadliest weapon against Ukraine — is still a superior force that has no mercy. Almost six months into the full-scale invasion, Russian advances remain generally stalled. But despite much effort with Western-provided advanced weaponry, Russia’s artillery force is still inflicting heavy losses on Ukraine and goes unanswered much too often. Read our story here.

Did the War End? Ep. 10: How Russia is Causing a Global Food Crisis. Listen to our podcast here.

Three months after Russia’s brutal months-long siege of Mariupol came to an end, life hangs by a thread for those who stayed behind. Russian airstrikes and artillery pounded Mariupol, reducing what was once a vibrant port city into a landscape of rubble. More than 20,000 people are believed to have been killed in Russia’s siege but the real number could be much higher, according to the Mariupol City Council. Read our story here.

Belarus Weekly: Russia continues to use Belarus as a launchpad for its missile strikes, Kyiv continues to bolster its border defenses. Read our weekly update here.

Update: Russian missile strike kills 1, wounds 2 in Zaporizhzhia. One woman died of her injuries on the way to the hospital, while two more people were hospitalized with shrapnel wounds, according to local authorities. Zaporizhzhia Oblast Governor Oleksandr Starukh earlier said that Russian forces fired five rockets on the city of Zaporizhzhia on the evening of Aug. 12.

Within 24 hours, Russia kills 7, injures 14 in Donetsk Oblast. According to Donetsk Oblast Governor Pavlo Kyrylenko, the Russian military killed three civilians in Bakhmut, two in Kurakhove, one in Mariinka, and one in Avdiivka on Aug. 11. The governor added that since the beginning of the full-scale invasion, at least 723 civilians have been killed in the region, and another 1,845 have been wounded. These numbers don’t include casualties in Russian-occupied Mariupol and Volnovakha.

Prosecutor General’s Office: 1 person killed, 3 injured in Russian shelling of Kharkiv Oblast. According to investigators, a 13-year-old boy was among those wounded in a Russian attack on the village of Zolochiv.

Ukraine returned bodies of 522 dead soldiers since Feb. 24. According to Oleh Kotenko, the government’s commissioner for disappeared persons, the 522 soldiers were previously listed as missing. Kotenko assured that Ukraine is working to retrieve all the bodies of the dead. He also clarified that Ukraine’s talks with Russia are mediated by the International Red Cross.

New York Times: Around 500 Russian troops killed or wounded every day in Ukraine. The New York Times reported, citing U.S. intelligence and military officials, that the high rate of Russian casualties in Ukraine signals that dictator Vladimir Putin “may not be able to achieve one of his key war objectives: seizing the entire eastern part of the country this year.” According to defense officials, Russia has already sent almost 85% of its fielded army to fight in Ukraine.

EU calls for demilitarization of Zaporizhzhia nuclear plant. EU foreign affairs chief Josep Borrell said that Russia should immediately hand over full control over the Zaporizhzhia plant to Ukraine. Borrell called for the withdrawal of Russian forces, and for access to the International Atomic Energy Agency at the site. Russia seized control of the plant, the largest in Europe, in early March and is using it as a military base to launch attacks on Ukraine.

Netherlands joins training of Ukrainian military. According to Defense Minister Oleksii Reznikov, the Netherlands has joined the U.K.-led training program to help Ukrainian military personnel master new weapons and improve their combat abilities. The Dutch will start their mission in late August.

More British M270 MLRS arrive in Ukraine. Defense Minister Oleksiy Reznikov thanked his British counterpart Ben Wallace and assured him that the Ukrainian military “skillfully uses foreign weapons on the battlefield.” He also noted that other “gifts” from foreign partners will soon arrive in Ukraine.

Lithuania asks allies to replace weapons it transfers to Ukraine. According to Deputy Defense Minister of Lithuania Argiris Butkevičius, the country is still looking for ways to support the Ukrainian army with additional weapons. Butkevičius says the process of transferring weapons would be faster if the allies agreed to hand Lithuania new weapons to increase the country’s defense capabilities. Lithuania handed Ukraine military trucks, off-road vehicles for demining, anti-aircraft and anti-tank weapons, mortars, and other military equipment.

Ukrainian 9-year-old becomes world champion in karate despite training online. David Ivanov had to prepare for the championship online because his coach couldn’t leave Russian-occupied Berdiansk in Zaporizhzhia oblast.