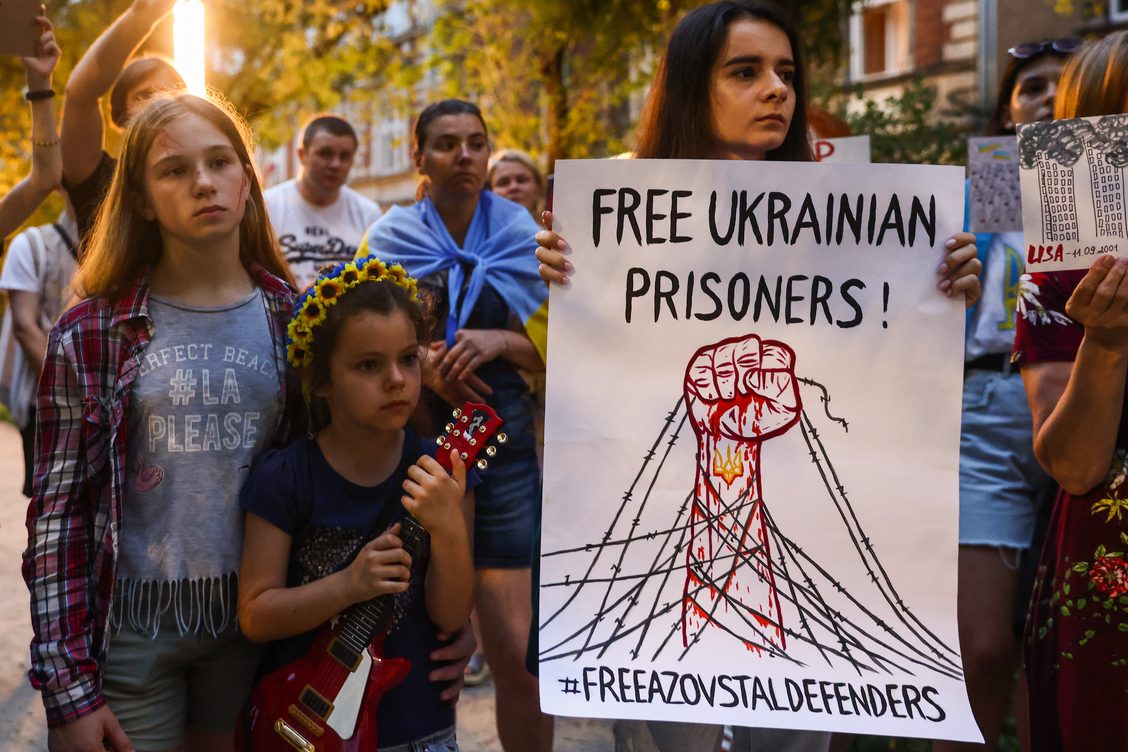 Ukrainians protest in front of the Consulate General of Russia in support of prisoners of war of Azovstal 4308 regiment defenders and against Russian invasion of Ukraine. Krakow, Poland on August 19, 2022. The Azov Regiment was among the Ukrainian units that defended the steelworks in the city of Mariupol for nearly three months before surrendering in May under relentless Russian attacks from the ground, sea and air. (Photo by Beata Zawrzel/NurPhoto via Getty Images)

Journalist: Western intelligence says that half of Russian Black Sea Fleet’s combat airpower knocked out in Saky airbase attack. The estimate was reported by the Guardian’s defense editor Dan Sabbagh from a briefing with an unnamed Western official. Kyiv earlier said that nine Russian aircraft were destroyed as a result of the explosions at the Saky airfield in Russian-occupied Crimea but didn’t confirm its involvement in the attack. The unnamed Western official also said that the recent explosions in Crimea were most likely the work of special forces or partisan activity.

Intelligence: Russian forces plan ‘show trial’ of Azovstal defenders in occupied Mariupol on Aug. 24. Ukraine’s Defense Ministry’s Intelligence Directorate said that Russia could conduct a missile strike on the site during the sham trial planned for Aug. 24, Ukraine’s Independence Day, and try to shift the blame to Ukraine.

Over 7,000 civilians evacuated from Donetsk Oblast since Aug. 1. Deputy Prime Minister Iryna Vereshchuk said that the government plans to evacuate at least 200,000 more from embattled Donetsk Oblast. Ukraine began mandatory evacuation from the region in August. Vereshchuk earlier said that a similar measure could be introduced in other oblasts where fierce fighting continues.

Podolyak: Red Cross has failed to respond to Russia’s murder of Ukrainian PoWs in Olenivka. Speaking to the Polish outlet Wirtualna Polska, Mykhailo Podolyak, an advisor to the President’s Office, said that organizations like the International Committee of the Red Cross “should sound the alarm that Russia is bullying, raping, and killing.” More than 50 Ukrainian prisoners of war were killed in Russian-occupied Donbas on July 28.

Media: Explosions heard in Sevastopol, Crimea. Mikhail Razvozzhayev, head of the Russian occupation government in Ukraine’s Sevastopol, claimed that drones had been shot down by Russian air defense. The day before, explosions were reported at the Belbek military airfield near the city.

Russia’s Gazprom to halt gas supplies to Europe via Nord Stream gas pipeline again. According to Russian gas giant Gazprom, the gas supplies will be suspended for three days starting Aug. 31 due to repairs. If no technical issues are found, the company will resume gas supplies of up to 33 million cubic meters per day, Gazprom said. Russia has been accused of constantly disrupting gas supplies via Nord Stream to blackmail and intimidate Europe.

Barros: Ukrainians targeting Russia’s logistics to regain control of Dnipro River and Kherson Oblast. In an interview with Radio Free Europe/Radio Liberty, George Barros, an analyst at the Institute for the Study of War, spoke about a shift in Ukraine’s strategy as it continues to target Russian logistics far behind the frontlines. According to Barros, Russia prepared for Ukraine’s southern counteroffensive and bolstered its defenses with units and heavy equipment, leading to Ukraine targeting supply centers that support Russian lines.

New York Times: Russia appoints new commander of Black Sea Fleet. After continued strikes on bases throughout Russian-occupied Crimea resulting in significant losses of material and equipment, Russia appoints Vice Admiral Viktor Sokolov as the new commander of Russia’s Black Sea Fleet, New York Times said, citing a report by the Russian state news agency, Tass. “While there have been unconfirmed reports of similar major changes in the leadership of other forces, they have not been made public by the Russian government,” New York Times wrote.

Macron’s office: Putin agrees to send IAEA inspection to Zaporizhzhia Nuclear Power Plant. Russian dictator Vladimir Putin agreed to an inspection by the International Atomic Energy Agency after a phone call with French President Emmanuel Macron. The French leader expressed concerns about safety risks at the Zaporizhzhia Nuclear Power Plant in Russian-occupied Enerhodar. Russia seized control of the plant in March and is using the site as a military base to launch attacks on Ukraine.

Canadian intelligence: Russia placed military equipment near reactors of Zaporizhzhia nuclear plant. “Without Russia’s illegal invasion, there would be no threat to the safe operation of the nuclear power plant,” the report reads. Russia, which has been shelling Ukrainian positions from the territory of the Zaporizhzhia Nuclear Power Plant in Russian-occupied Enerhodar, has been accused of using it as a shield and a tool of blackmail.

Energoatom: Russian forces planning major false flag operation at Zaporizhzhia nuclear plant. Russian forces brought a TV crew to the plant for a meeting with FSB operatives, after which Russian troops shelled the training center of the power plant from a bus station and discharge canal, Ukraine’s state nuclear company said. Energoatom also said it has information that Russian forces are planning to stop working power units at the nuclear power plant “in the near future” and disconnect them from the communication lines supplying power to the Ukrainian power system.

Local official in Sumy Oblast killed by landmine. According to Sumy Oblast Governor Dmytro Zhyvytskyi, Ivan Deineka, a member of the Krasnopillya village council and the head of the oblast’s farmers association, set off the mine when he pulled his truck over on the roadside on Aug. 19.

Update: Death toll in Russia’s attack on Kharkiv rises to 21. The Kharkiv Regional Emergency Service reported that rescuers found the bodies of two people under the ruble of a dormitory destroyed in the attacks. Russia conducted two missile strikes on Ukraine’s second-largest city, targeting two dormitories on Aug. 17-18. At least 44 were injured in the attacks.

Politico: Cyprus, Greece oppose banning tourist visas for Russians. EU foreign ministers plan to discuss visa restrictions for Russians amid the war in Ukraine on Aug. 31. Cypriot Foreign Minister Kornelios Korneliou has said that “it would be a decision in the wrong direction.” Nearly 25% of all tourists on the island were from Russia before it launched the ongoing all-out invasion of Ukraine on Feb. 24. At least four countries – Estonia, Finland, Latvia and Lithuania – have already supported the idea of an EU-wide ban on Russian tourists.

Germany plans to send 255 Vulcano projectiles to Ukraine. 155 mm Vulcano projectiles are capable of hitting targets at a distance of up to 70 kilometers. The German government also said it would supply to Ukraine 5,000 man-portable anti-tank weapons, 100,000 first aid kits, 200 trucks, a COBRA counter-battery radar system, and 20 rocket launchers on pick-up trucks with 2.000 rockets.