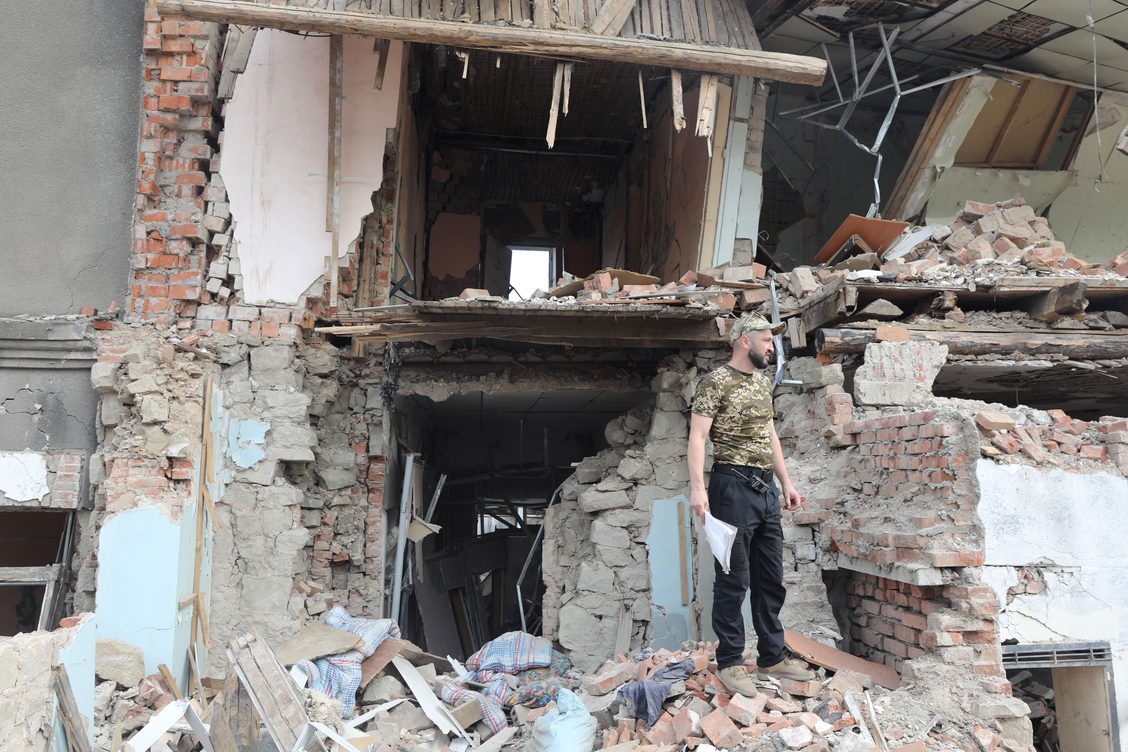 A Ukrainian volunteer, Artem Belan, stands on the rubble of a building destroyed by a Russian attack in Kostiantynivka, Donetsk Oblast, on July 8, 2022. (Anastasiia Lapatina)

Dear readers, we recently launched a new newsletter, Belarus Weekly, and you are the first to see it! To receive the Belarus Weekly newsletter in the future, subscribe via this link.

Intelligence: Russian forces preparing for new stage of offensive. According to Vadym Skibitsky, representative of Ukraine’s Defense Ministry Intelligence Directorate, Russian military activity shows that “undoubtedly, preparations for the next stage of offensive actions are underway now.” Skibitsky also said the threat of an attack from Belarus is currently not as high as it was before the start of Russia’s invasion.

UK Defense Ministry: Ukraine successful in repulsing Russian attacks since Lysychansk was ceded. The U.K. Defense Ministry said in its recent intelligence update that Russia made “premature and false claims” that it entered the town of Siversk earlier this week. Russian offensive remains reduced in scope and scale, with fighting focused on Siversk and Bakhmut, Donetsk Oblast, the ministry added.

Zelensky: ‘No Russian missiles or artillery can break our unity.’ President Volodymyr Zelensky also said on the anniversary of the Declaration of State Sovereignty of Ukraine that “it should be equally obvious that it cannot be broken with lies or intimidation, fakes or conspiracy theories.“

Financial Times: Zelensky aide accuses Western banks of ‘war crimes’. Oleh Ustenko, an advisor to President Volodymyr Zelensky, has written letters to JPMorgan Chase, HSBC, Citigroup, and Crédit Agricole. He asked the banks to stop working with companies that sell Russian oil and shares in state-controlled oil and gas groups Gazprom and Rosneft. Ustenko told the Financial Times that Ukraine’s Justice Ministry intends to sue the banks at the International Criminal Court when the war is over. “They are committing war crimes because they are helping the Putin regime,” Ustenko said.

Institute for the Study of War: Russian forces may try to seize entire Kharkiv Oblast, despite low chance of success. The U.S. think tank suggested on July 16 that Russian forces may have been instructed by the Kremlin to take control of Kharkiv Oblast in its entirety, despite a low likelihood of success. The ISW also reported that Ukrainian HIMARS strikes against Russian ammunition depots, logistical elements, and command and control are “likely degrading Russian artillery campaigns.”

Former head of SBU in Crimea detained on suspicion of treason. The press service of the Security Service of Ukraine said it the SBU had detained Oleh Kulinich, who is charged with several articles of the Criminal Code, including treason, without disclosing where Kulinich is currently being held. President Volodymyr Zelensky appointed Kulinich in Oct. 2020, but fired him on March 2 of this year.

Intelligence: 7 civilians evacuated from Sviatohirsk Lavra in Donetsk Oblast. Seven civilians were evacuated from the Sviatohirsk monastery on July 16, according to Ukraine’s Defense Ministry Intelligence Directorate. Those evacuated include a young family with three children, the youngest of which was reportedly born a few days prior at the monastery, and two elderly people. Ukraine is attempting to facilitate a ceasefire and create a humanitarian corridor to evacuate up to 600 civilians, including over 50 children, sheltering at the monastery.

Washington Post: Big Tech ignores requests to remove disinformation, hate speech against Ukrainians. According to research by the Disinformation Situation Center shared with the Washington Post, roughly 70% of posts and 90% of accounts flagged as promoting anti-Ukrainian hate speech on YouTube and Twitter remained active as of late June. LinkedIn reportedly took down fewer than half of posts flagged by Ukrainian officials as Russian pro-war propaganda.

People call them angels. In a blue van stuffed with bags of food, sleeping mats, water, and medicine, volunteers Artem Belan and Volodymyr Antonov, both 41, drive out of Kyiv’s suburbs for a daring mission: evacuating civilians from the frontline towns of Donetsk Oblast. Read our story here.

Volodymyr Bebekh finished watering his garden in the evening and decided to wash up in his outdoor shower. As he went to turn on the water, a Russian rocket flew right into his neighbor’s home. “Instead of a shower, I got covered in dirt,” Bebekh said. Read our story here.

Governor: All bodies identified after Vinnytsia missile strike. According to Vinnytsia Oblast Governor Serhii Borzov, 68 people are currently hospitalized, 14 of them in serious condition. Vinnytsia Mayor Serhii Morhunov said the families of those killed and injured would receive Hr 50,000 ($1,700) and Hr 25,000 ($850) in assistance, respectively. As a result of the Russian missile strike on the city’s center on July 14, 24 people were killed, and 202 wounded.

Dnipropetrovsk Oblast Governor: Russian shelling kills 2 people in Nikopol. According to Valentyn Reznichenko, rescuers have pulled two bodies from under the rubble of a building attacked by Russian forces. One injured woman remains in the hospital. The governor said that Russia had shelled a residential area in Nikopol with Grad multiple rocket launchers.

Prosecutors: Russia’s war has killed at least 353 children, wounded 662 since Feb. 24. According to the Prosecutor General’s Office, the numbers are expected to be higher since they do not include casualties in the Russian-occupied territories and areas where hostilities are ongoing. The biggest number of children casualties was recorded in Donetsk Oblast, where 353 children were either killed or injured.

Reuters: G20 finance ministers leave talks divided over Russia’s war in Ukraine. According to Reuters, the G20 finance ministers reached a “strong consensus” on global food security during two-day talks in Indonesia. However, they failed to issue a formal communique due to disagreements over how to address Russia’s invasion of Ukraine.

EU urges Russia to accept responsibility for downing of MH17. The European Council said ahead of the eighth anniversary of the downing of Malaysia Airlines Flight MH17 that it “expects Russia to accept its responsibility and to fully cooperate with efforts to establish accountability.” The MH17 flight was shot down on July 17, 2014, by a missile fired by Kremlin-controlled militants in Ukraine, killing all 298 people on board.

WSJ: Chinese tech sellers increase export to Russia amid Western sanctions. Chinese companies have increased the export of microchips and other electronic components and raw materials to cover the needs of the Russian military so that it can continue fighting in Ukraine, the Wall Street Journal reported. Microchip shipments doubled to about $50 million in the first five months of 2022 compared to 2021, undermining the Western push to stall the Russian war effort in Ukraine.

Gazprom asks Siemens for documents to transport Nord Stream 1 turbine to Russia. The turbine, which is intended for Russia’s Nord Stream 1 gas pipeline in the Baltic Sea, was being repaired in Canada at German engineering firm Siemens’ facilities. Canada recently allowed the company to bypass Western sanctions and send the turbine back to Germany, despite Ukraine’s concerns that it will allow Russia to continue weaponizing its energy supplies to Europe. The Ukrainian World Congress is suing the Canadian government for the decision, accusing it of violating sanctions.

Italian FM doubts Rome can send arms to Ukraine amid coalition crisis. Luigi Di Maio told Politico the opponents of Italian Prime Minister Mario Draghi are doing the work of Russian dictator Vladimir Putin. He urged parties not to bring down the government during the next week’s confidence vote in the parliament, adding that it could leave Italy without the authority to continue to arm Ukraine, and “it is one of the many serious problems.”

Ukrainian duo win gold in acrobatic gymnastics at 2022 World Games. Taisiia Marchenko and Viktoriia Kozlovska took gold medals at the World Games, an international event for sports that are not contested in the Olympic Games. Ukraine currently ranks fifth, with 10 gold, 10 silver, and 14 bronze medals.