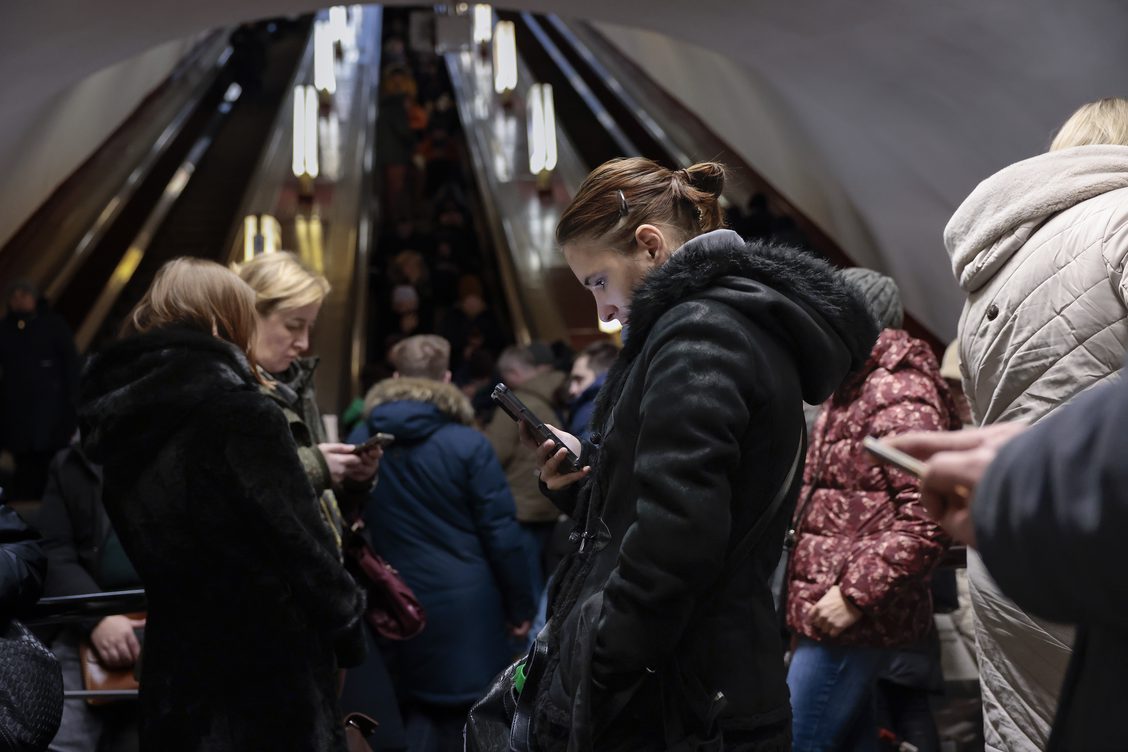 Citizens shelter in the Metro as Russia launches another missile attack on Dec. 05, 2022 in Kyiv, Ukraine. Ukrainian officials expect a new wave of Russian bombing this week, with previous rounds targeting critical infrastructure and causing massive water and power cuts, including in the capital Kyiv. (Photo by Jeff J Mitchell/Getty Images)

Power outages reported in several Ukrainian regions after Russian missile strikes. Electricity and water supply have been cut off in Zhytomyr and some settlements of the region due to Russia’s mass missile attack on Ukrainian cities on Dec. 5, news outlet Suspilne reported. Part of Kryvyi Rih in Dnipropetrovsk Oblast has also been left without power while boilers and water pumping stations were disconnected, according to Oleksandr Vilkul, head of the city military administration.

Governor: About 40% of residents left without electricity in Kyiv Oblast on Dec. 5. Russia hit an energy infrastructure facility near Kyiv during its eighth mass missile strike on Ukraine on Dec. 5, Kyiv Oblast Governor Oleksii Kuleba reported, adding that emergency blackouts have been implemented in the region. 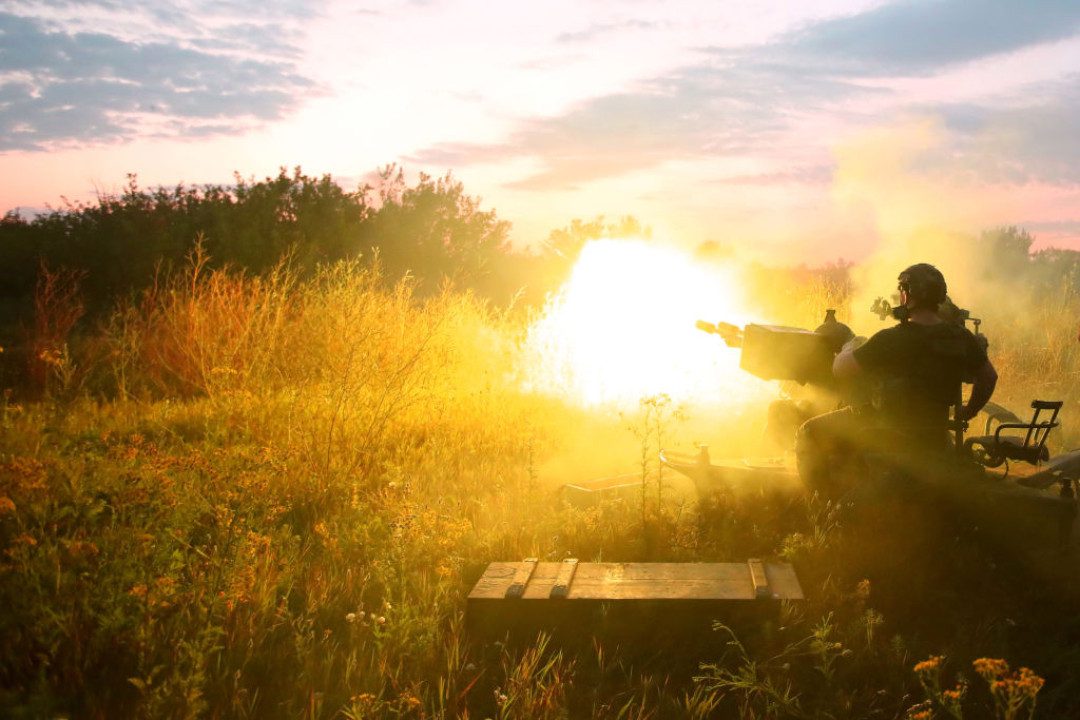 Russia unleashed another mass missile barrage on Ukraine on Dec. 5 targeting energy infrastructure across the country. 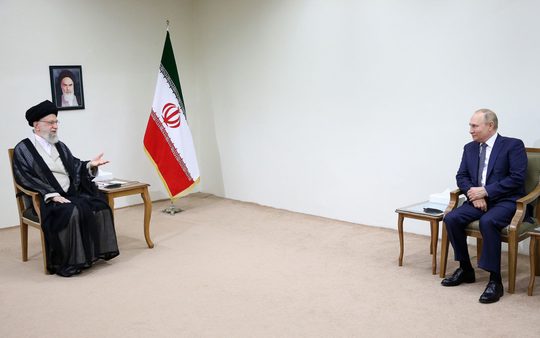 How Russia loses allies, influence amid its aggression against Ukraine.

By invading Ukraine, Russian dictator Vladimir Putin sought to strengthen Russia’s geopolitical standing and spread the country’s influence across the globe. In reality, it backfired. 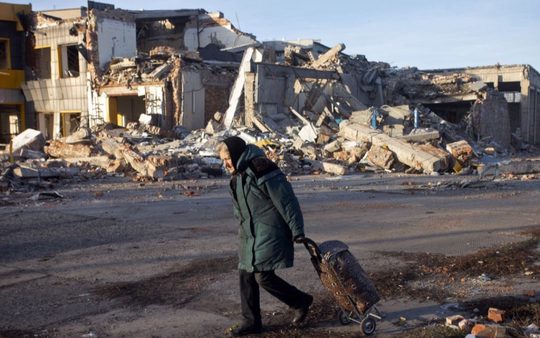 President Volodymyr Zelensky praised Ukraine’s air defense for shooting down “most of the missiles” fired by Russia.

Zelensky: 4 people killed by Russia’s Dec. 5 attacks on Ukraine. President Volodymyr Zelensky also said in his evening address that emergency services are working on restoring energy and water supply to the areas damaged by the strikes.

UN: At least 17,181 civilian casualties in Ukraine during Russia’s full-scale invasion. According to an estimate by the United Nations human rights agency, Russia’s war against Ukraine killed at least 6,702 civilians and injured at least 10,479 from Feb. 24 through Dec. 4.

Russia says 3 soldiers killed by Ukrainian drone attacks deep into Russian territory. Russia’s Defense Ministry said that four soldiers had been injured by the alleged drone attacks on the Dyagilevo airfield near the city of Ryazan and the Engels-1 military air base in the Saratov region on Dec. 5.

Bloomberg: EU to target Russia’s drone sector in 9th sanctions package. The European Union plans to impose restrictions on Russia’s drone industry under its new package of sanctions, which is to be approved next week, Bloomberg reported on Dec. 5, citing people familiar with the matter.

Canadian company confirms its parts ended up in Iranian drones. President of Canadian company Tallysman Wireless Gyles Panther confirmed that his company’s products were found in the Iranian-made Shahed-136 drones that Russia has been using to attack infrastructure in Ukraine, the Globe and Mail reported.

Moldovan Interior Ministry: Missile section found in border region. Moldova’s Interior Ministry said part of a missile was found by a police patrol near the village of Briceni, northern Moldova, close to the Ukrainian border. The missile’s origin is still unspecified, but a photo attached to the Ministry’s post appears to be of the booster section of a large missile.

US Army plans ‘dramatic’ ammo production increase amid Russia’s invasion of Ukraine. The U.S. Army is seeking a “dramatic” increase in monthly production of 155mm artillery shells over the next three years as donations to Ukraine are “straining allied munitions stockpiles,” Doug Bush, the assistant secretary of the U.S. Army for acquisition, told Defense News, a U.S. media outlet.

Foreign Ministry: 3 more parcels with animal parts sent to Ukrainian diplomats in Spain. Spanish police seized three envelopes on Dec. 5 allegedly containing animal eyes, which were addressed to Ukraine’s embassy in Madrid, the Consulate General in Barcelona, and the Consulate in Malaga, Foreign Ministry’s spokesman Oleh Nikolenko reported. In total, 21 attacks on Ukrainian diplomatic missions in 12 countries have been recorded, according to Nikolenko.

Financial Times names Zelensky ‘person of the year.’ “The president of Ukraine embodies the resilience of his people and has become a standard bearer for liberal democracy,“ Financial Times wrote. “The 44-year-old Zelensky has earned a place in history for his extraordinary display of leadership and fortitude,” the newspaper added.