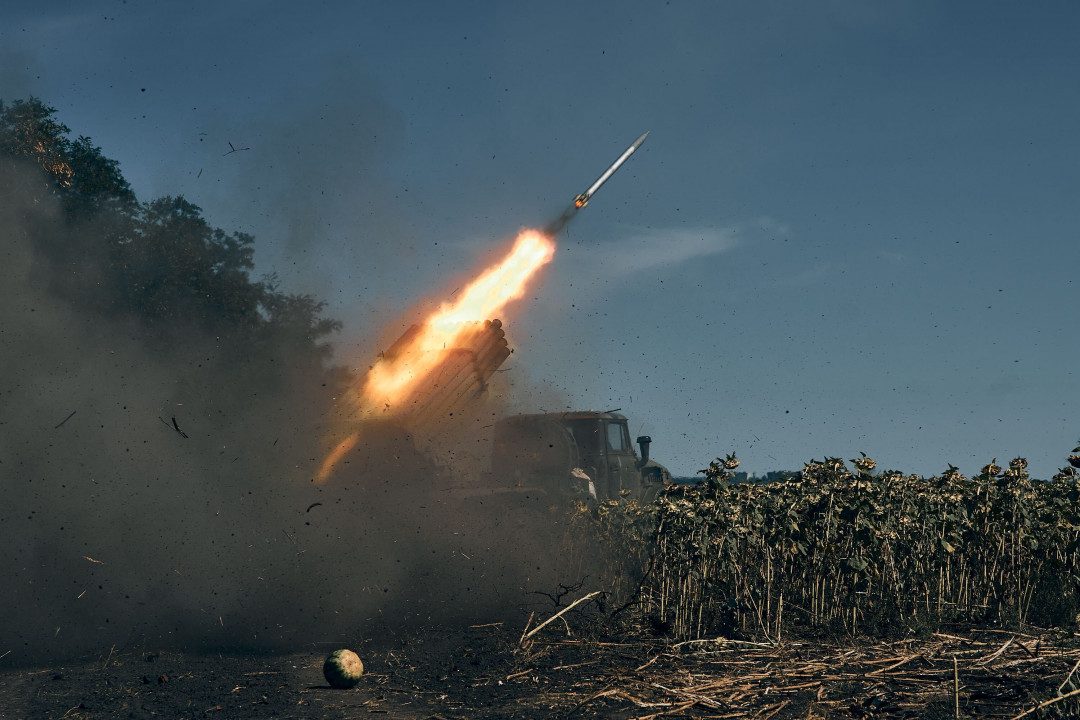 A photo of a multiple rocket launcher firing a rocket in an undisclosed area in Ukraine. (Kostiantyn Liberov)

Official: Russia launches missile attack on Kryvyi Rih. Oleksandr Vilkul, head of the military administration of Kryvyi Rih, wrote on Telegram that early in the morning on Sept. 6, Russia hit the city in Dnipropetrovsk Oblast with missiles. Vilkul gave no further details on the attack.

Governor: Russia shells Nikopol overnight on Sept. 6, dozens of residential buildings damaged. Valentyn Reznichenko, governor of Dnipropetrovsk Oblast, reported that overnight on Sept. 6, Russian forces shelled Nikopol three times with Grad multiple rocket launchers, after which two people were hospitalized. Twenty high-rise buildings and 11 homes were damaged and one home was completely destroyed as a result of the shelling and more than 2,000 residents in the city are without electricity, Reznichenko said.

Air Force: Ukrainian forces down 3 Russian drones. Ukraine’s military reportedly shot down two Orlan-10 UAVs over Kharkiv Oblast and one in Vinnytsia Oblast over the past 24 hours. Russian forces employ UAVs in Ukraine for aerial reconnaissance and adjustment of fire.

UK intelligence: Russia repeatedly misses deadlines to occupy entire Donbas. The Ukrainian authorities have claimed that Russian troops have a Sept. 15 deadline for seizing all of the Donbas but they are highly unlikely to achieve this, the U.K. Defense Ministry said. Russian troops have only advanced 1 kilometer per week in the Donbas so far, according to the ministry. The missed deadlines will further complicate Russia’s efforts to organize sham “referendums” in the region, the report stated.

Ukraine’s military: Russian forces place equipment in churches, kindergartens. In Kherson Oblast, Russian troops have placed military equipment in kindergartens in the Verkhnii Rohachyk settlement as well as in churches in the village of Chervonyi Mayak, according to the General Staff of the Armed Forces of Ukraine. Russian forces are also using a church as a field hospital in the village of Mala Komyshuvakha in Kharkiv Oblast, the General Staff reported.

New York Times: US intelligence reports Russia is buying artillery from North Korea. According to newly declassified American intelligence, North Korea is selling artillery shells and rockets by the millions to Russia, the New York Times reports. Together with Iran’s shipment of drones to Russia, U.S. officials consider both moves as signs that sanctions are affecting Russia’s ability to obtain arms.

Bloomberg: Report warns of ‘deep and prolonged’ recession in Russia. An internal report seen by Bloomberg prepared for the Russian government on the true economic impact of Russia’s invasion presents a “far more dire picture” than the usual “upbeat public pronouncement.” Two of the three scenarios see Russia’s economy returning to its prewar level “at the end of a decade or later,” Bloomberg reports. All three scenarios show that pressure from sanctions will intensify, and Russia’s ability to supply its own market may be affected by Europe reducing its dependence on Russian oil and gas.

Russia says it won’t resume gas supplies to Europe until sanctions are lifted. Blaming sanctions imposed by the West for its operational failure to deliver gas to Europe through the key Nord Stream 1 pipeline, Russian President Vladimir Putin’s spokesman Dmitry Peskov said on Sept. 5 that Russia’s gas monopoly Gazprom will only resume the flows once they are lifted.

Gas prices jump by 30% to almost $2,900 over Nord Stream shutdown. October futures on the ICE Futures exchange rose to $2,855 per 1,000 cubic meters on Sept. 5 from $2,213 on Sept. 2. Russian gas giant Gazprom halted gas supplies via the Nord Stream gas pipeline on Aug. 31 for an indefinite period. European leaders have accused Russia of weaponizing energy supplies to blackmail and intimidate the West, while Moscow blames Western sanctions and technical issues for the supply disruption.

Russia has earned at least 158 billion euros in energy exports since start of full-scale invasion. According to the Centre for Research on Energy and Clear Air, Russia earned 158 billion euros from fossil fuel exports from Feb. 24 to Aug. 24. The Finnish research center reports that the EU is Russia’s largest fossil fuel importer, accounting for 54% of Russian exports worth approximately 85 billion euros.

ISW: Ukraine’s counteroffensive ‘tangibly degrading’ Russian capabilities in south. The Institute for the Study of War wrote on Sept. 5 that the announced postponements of sham referenda in Russian-occupied territories of Ukraine’s south may confirm the success of Ukraine’s counteroffensive in disrupting Russian occupying forces. “Ukrainian forces intend to slowly chip away at both Russian tactical and operational level capabilities in Kherson Oblast, and in doing so will likely have significant impacts on the administrative and bureaucratic capabilities of occupation officials,” the ISW wrote.

Proxy claims that staged ‘referendum’ in Kherson Oblast to be postponed. According to Russian state-controlled news agency TASS, Kirill Stremousov, the leader of Russia’s proxies in Kherson Oblast, said that the plan to hold a staged “referendum” on joining Russia is on hold amid Ukraine’s ongoing counteroffensive in the south. Ukraine and its Western partners have criticized such plans in Russian-occupied territories as a sham.

Podolyak calls on Ukrainians in occupied territories, including Crimea, to prepare for de-occupation. Mykhailo Podolyak, an advisor to the head of the Presidential Office, recommended that Ukrainians residing in Russian-occupied territories, including Crimea, take shelter, stock up on water, and charge their power banks. Explosions have been reported in Crimea since early Aug.

Deputy PM demands humanitarian corridor from areas near Zaporizhzhia nuclear plant. Deputy Prime Minister Iryna Vereshchuk said on Sept. 5 that Russia refuses to provide a humanitarian corridor for people who want to leave the areas surrounding the Zaporizhzhia nuclear power plant. Ukrainian intelligence also reported that over the past few days, there has been an increase in residents looking to leave Russian-occupied Enerhodar where the plant is located for territories under Ukrainian control.

Energy Minister: World on ‘brink of nuclear disaster’ due to Russian occupation of Zaporizhzhia nuclear plant. Earlier, Ukraine’s state nuclear operator Energoatom reported that Russian shelling disconnected the last working power line at the Zaporizhzhia Nuclear Power Plant. Energy Minister Herman Halushchenko said any repair work is impossible due to ongoing hostilities. “Deoccupying the plant and creating a demilitarized zone around it is the only way to ensure nuclear safety,” he said.

Energoatom: Zaporizhzhia nuclear plant’s last operating reactor disconnected from grid. Ukraine’s state nuclear operator Energoatom said on Sept. 5 that Russian forces continued shelling the territories around the plant for the past three days, further damaging the power lines connecting reactors to the grid. The last working power line connecting the reactors at the Russian-occupied plant to the grid was disconnected as a result of a fire caused by Russian shelling on Sept. 5, according to the report.

4 IAEA representatives out of 6 leave Zaporizhzhia nuclear plant. Ukraine’s state nuclear monopoly Energoatom said that two representatives of the International Atomic Energy Agency were expected to continue working at the plant on a permanent basis. Russia, which has been attacking Ukrainian positions from the territory of the Zaporizhzhia Nuclear Power Plant in Russian-occupied Enerhodar, has been accused of using it as a shield and a tool of blackmail.

Will UK support for Ukraine change under Liz Truss? Liz Truss, UK’s future prime minister, is expected to be just as committed to helping Ukraine as her outgoing predecessor and fellow Tory, Boris Johnson. However, Britain’s ongoing economic problems may limit its options. The Bank of England expects the country to go through a recession and its inflation has risen to around 10%.

Governor: About 400 Russian soldiers killed, 100 military equipment recently destroyed in occupied Kreminna, Luhansk Oblast. Luhansk Oblast Governor Serhiy Haidai also reported on Sept. 5 that there is some positive news from the left bank of the Siverskyi Donets River, which he says gives hope for the de-occupation of Luhansk Oblast.

IAEA to publish report on situation at Zaporizhzhia plant on Sept. 6. International Atomic Energy Agency (IAEA) head Rafael Grossi will publish a report on Ukraine, including the nuclear and physical safety of the Zaporizhzhia nuclear power plant, the IAEA said. Grossi will also brief the UN Security Council.

Germany to temporarily halt phase-out of 2 nuclear power plants. After Russia cut gas supplies to Europe, Germany’s Economy Minister Robert Habeck announced on Sept. 5 that two of Germany’s last nuclear power plants will remain “on standby until mid-April 2023, in order, if necessary, to provide an additional contribution to the electricity grid in southern Germany,“ the Guardian reports. Germany’s last two nuclear plants were set to cease operations at the end of 2022 following a 2011 law in Germany to phase out nuclear power.

Borrell: EU will continue supporting Ukraine despite Russia’s blackmail. Speaking at a press conference after a meeting of the EU-Ukraine Association Council in Brussels, the bloc’s foreign affairs chief Josep Borrell said on Sept. 5 that what Ukraine needs is “concrete support and weapons,” and they will be provided. Earlier on Sept. 5, Russian dictator Vladimir Putin’s spokesperson Dmitry Peskov said that Russia’s gas monopoly Gazprom won’t resume gas supplies to Europe through the key Nord Stream 1 pipeline until sanctions are lifted.

Russian court shuts down Novaya Gazeta, one of country’s last independent news outlets. Moscow’s Basmanny District Court stripped the media license from Novaya Gazeta on Sept. 5, banning the news outlet from operating inside the country. While Russia’s media regulator Roskomnadzor accused Novaya Gazeta of failing to provide a change of ownership documents in 2006, editor-in-chief Dmitry Muratov said the ruling was “a political hit job, without the slightest legal basis.”

UK extends Ukrainian soldiers’ training for two more weeks. The duration of the combat course has been extended from three to five weeks. Around 4,700 troops have already been trained at military bases in the UK. The course, which includes military instructors from eight other countries, began in June.

Kyiv most polluted city in the world due to peat fires. Fires started in Kyiv Oblast’s Vyshgorod District and Brovary District, engulfing the city in heavy smoke and putting Kyiv in front of Bogota, Colombia in terms of air pollution on the morning of Sept. 5, according to the QiAir air quality index.