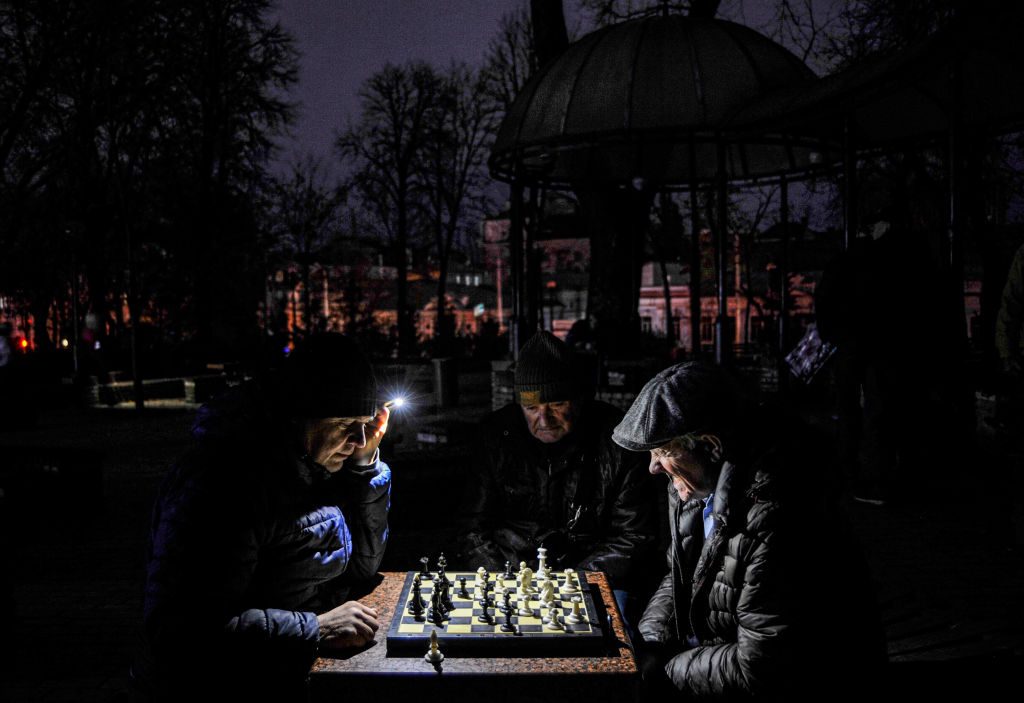 Men seen playing chess with a flashlight in a park in Kyiv on Nov. 12. The Russian army carried out massive rocket and kamikaze drone attacks on Ukrainian energy infrastructure. According to expert estimates, 40% of the energy infrastructure is now destroyed or damaged. (Getty Images)

Zelensky: Ukraine creating ‘invincibility centers’ if Russian attacks knock power out. If massive Russian strikes continue to take place on energy infrastructure and the electricity supply cannot be restored for hours, Ukrainians will be able to access “invincibility centers” to access all basic services, President Volodymyr Zelensky said in his daily briefing.

Occupation government claims two drones shot down over Sevastopol. Mikhail Razvozhaev, head of the illegal Russian occupation government in Ukraine’s Sevastopol, said that the drones had been downed near the Balaklava Thermal Power Plant in the city. He added that there were no casualties and no damage to civilian infrastructure.

Reznikov: Russia has used most of its high-precision missile arsenal in Ukraine. According to the data published by Ukraine’s Defense Minister Oleksii Reznikov, Russia has 119 Iskander missiles left in stock compared to 900 before the start of the full-scale invasion of Ukraine.

Iranian, Ukrainian experts meet to discuss Russia’s use of Iranian drones. “Ukraine has informed Iran that the consequences of complicity in the Russian aggression will be incommensurable with the potential benefits of cooperation with Russia,” Oleh Nikolenko, a spokesman for Ukraine’s Foreign Ministry, told CNN.

SBU conducts raid at historic Kyiv monastery. Ukraine’s Security Service (SBU) conducted a “counterintelligence” operation at Kyiv’s Pechersk Lavra and other locations of the Ukrainian Orthodox Church to counter alleged “subversive activities of the Russian special services in Ukraine,” the SBU said in a Telegram post.

Ukrainian prosecutors open criminal case into shootout involving Russian POWs. The Prosecutor General’s Office said it was investigating video footage that appears to show a Russian soldier opening fire on Ukrainian troops when other Russian soldiers were surrendering as prisoners of war.

Inside one of Russia’s torture chambers in Kherson (PHOTOS)

Local official: Russian strikes at Kherson kill 3 people. According to Suspilne media outlet, 12 sites have been hit in Kherson as of 3:30 p.m.

Governor: Russian forces kill 4 civilians, injure 4 in Donetsk Oblast. Russian attacks killed civilians in Bakhmut, Heorhiivka, Kurakhove, and Petrivka, Donetsk Oblast Governor Pavlo Kyrylenko reported on Nov. 22. Four civilians have also been injured by Russian attacks in the past 24 hours, Kyrylenko said. It is not possible to determine the number of casualties in Mariupol and Volnovakha.

US to provide Ukraine with $4.5 billion as direct budget support. The U.S. will start disbursing the funds in the next few weeks, which will help Ukraine improve economic stability and support critical government services, Treasury Secretary Janet Yellen said on Nov. 22.

EU gives Ukraine another 2.5 billion euros for reconstruction. The bloc plans to provide a total of 18 billion euros to Ukraine in 2023, according to European Commission President Ursula von der Leyen.

WSJ: Senators ask Biden administration to supply Ukraine with drones. A group of 16 U.S. senators from the Democratic and Republican parties have written a letter to Defense Secretary Lloyd Austin, calling on the administration to provide Ukraine with MQ-1C Gray Eagle combat drones, the Wall Street Journal reported.

Russian Gazprom threatens to cut gas flows to Europe via Ukraine. Russian state-owned energy monopolist Gazprom said on Nov. 22 that about 52 million cubic meters of gas meant to be transported through Ukraine to Moldova are being kept in Ukraine. Kyiv denied the accusations.