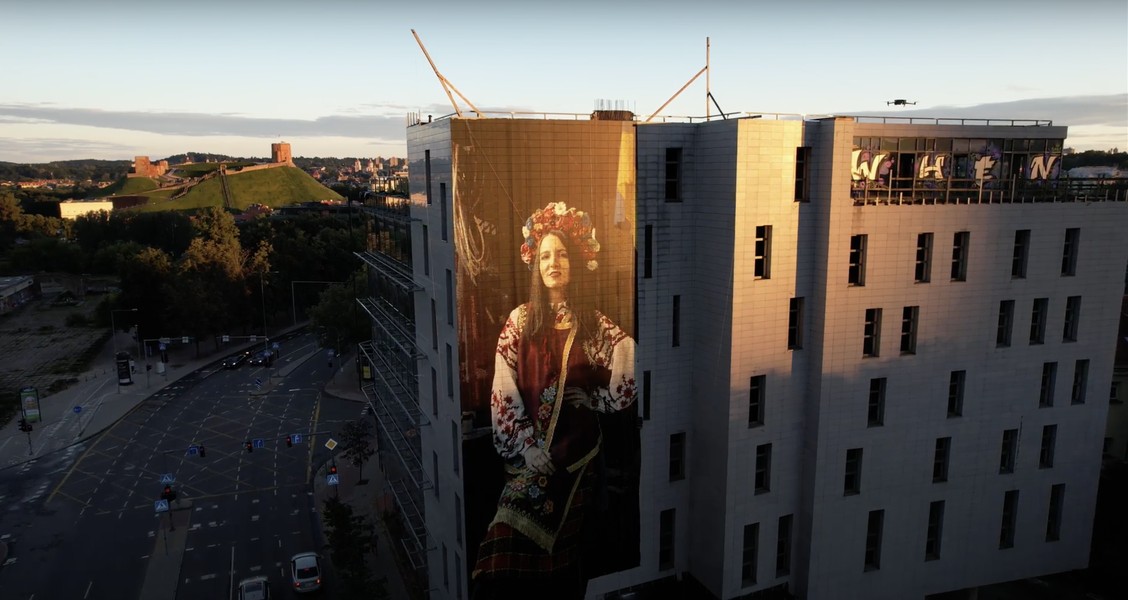 A mural depicting a Ukrainian woman in a national costume has appeared on the Moscow House facade in Vilnius, Lithuania. This is a joint project called “Do Peremogi” (“Until Victory”) by Lithuanian, Ukrainian, and Estonian artists in response to Russia’s war in Ukraine. (Courtesy Šarūnas Černiauskas)

Intelligence: Before executing, Russian forces tortured Ukrainian POWs in Olenivka. According to Defense Ministry’s Intelligence Directorate, Russian-installed militants, together with the Kremlin-controlled Wagner Group mercenaries, tortured Ukrainian prisoners of war. Russians had no intention of exchanging POWs, preferring to murder prisoners to hide the evidence of torture, the report reads.

Russia’s Gazprom refuses to take back turbine for Nord Stream 1 gas pipeline. The turbine was repaired in Canada at German engineering firm Siemens’ facilities. Canada recently allowed the company to bypass Western sanctions and send the turbine back to Germany. However, Russian gas giant Gazprom is refusing to take it back, arguing that Siemens has violated its contractual obligations and that the turbine’s delivery would pose a risk of sanctions. Russia is accused of cutting gas supplies via Nord Stream to blackmail and intimidate Europe. Meanwhile, the Ukrainian World Congress is suing the Canadian government for the turbine’s delivery, accusing it of violating sanctions.

Kuleba: Next ships with Ukrainian grain ready to depart. Ukraine’s Foreign Minister Dmytro Kuleba said on Twitter that the ships will reach foreign customers and help avert hunger if “Russia holds to its commitments under the UN-brokered grain initiative.” In the meantime, first Ukrainian vessel with grain passes checks in Turkey, heads to Lebanon. The Joint Coordination Center, which includes representatives from Ukraine, Russia, Turkey, and the United Nations, checked the Sierra Leone-flagged Razoni vessel on Aug. 3. The ship now heads for Tripoli, Lebanon. Ukraine’s Infrastructure Minister Oleksandr Kubrakov said that 16 more vessels are waiting their turn in Ukrainian ports.

Zelensky calls cooperation of former European leaders with Russia ‘disgusting.’ President Volodymyr Zelensky said in his nightly address on Aug. 3 that “it is simply disgusting when former leaders of powerful states with European values work for Russia, which is fighting against these values.” The President remark likely addressed the former German Chancellor Gerhard Schroeder’s recent visit to Russia, where he met with Russian dictator Vladimir Putin and reportedly discussed negotiations between Russia and Ukraine.

Ukraine’s military liberates 7 villages in Kherson Oblast. Ukrainian troops had already liberated 53 villages in the Russian-occupied Kherson Oblast as of Aug. 2. The Russian military is also importing civilian doctors from Russia in the absence of medical personnel as the humanitarian situation worsens, according to the Kherson Oblast Military Administration.

Official: 30,000 children have returned to Ukraine since May. Education Minister Serhiy Shkarlet estimated that 641,000 children remain abroad — 15% of the total number of Ukrainian students as of Feb. 24. The UN refugee agency reported earlier this week that 10.35 million individuals crossed the border from Ukraine since the war started.

Bloomberg: Russia finds new way to bypass Western sanctions on oil market. To bypass sanctions, Russia is using the El Hamra oil terminal in Egypt on the Mediterranean coast, according to Bloomberg. Some 700,000 barrels of Russian oil were delivered there on July 24 and picked up by another vessel a few hours later. “The unusual move makes the cargo’s ultimate destination harder to track, adding to a trend of Russian oil shipments becoming increasingly obscured,” Bloomberg reported.

South China Morning Post: Zelensky seeks direct talks with Xi Jinping. In an interview with the outlet, President Volodymyr Zelensky said he has been asking for a direct conversation with Chinese President Xi Jinping since Feb. 24 without success. Zelensky also called on China to leverage its political and economic influence over Russia to stop the fighting. “I’m sure that without the Chinese market for the Russian Federation, Russia would be feeling complete economic isolation,” Zelensky said.

Russia plans to open duty-free shops for diplomats, their families. Russia is launching several duty-free shops accessible only to diplomats, employees of embassies, consulates, international organizations, and their families. The shops will open in Moscow and St. Petersburg with prices listed in rubles, U.S. dollars, and euros and will be operated by the Russian foreign ministry and another local entity chosen by a competition. The idea resembles that of Beriozka stores, state-run shops in the USSR to which only foreign tourists with hard currency had access.

Read and listen to our exclusives here

After two days of a closely-watched and perilous route from the mine-ridden Odesa port, the Sierra Leone-flagged Razoni ship arrived in Istanbul on Aug. 3. The vessel carrying Ukrainian grain was the first ship to leave the city since Russia began its sea blockade in February. Read our story on the first step toward unblocking millions of tons of crops.

After over five months of its full-out war, Russia is employing close to 100% of its conventional military power against Ukraine, with only limited results to show for it. Russia is steadily losing combat strength as the country struggles to generate high-quality reserves. It has spent the last month refraining from large-scale operations in Donbas and elsewhere, trying to recover from previous battles. For Ukraine, this hiatus is a window of opportunity.

In the final episode of the “Media in Progress” podcast series, we reflect on how we believe the Kyiv Independent has become an established media outlet since Feb. 24, and how our team of journalists continues to work during the war.

Mayor: Russian shelling damages residential buildings in Mykolaiv. Mykolaiv Mayor Oleksandr Sienkevych reported that Russian forces shelled two districts of the city overnight on Aug. 4. Explosions were heard at 4 a.m. local time. No casualties have been reported yet. Earlier on Aug. 3, Sienkevych said that Russia’s war has killed at least 131 people in Mykolaiv, including a child, and injured 590 since Feb. 24.

US Senate votes to add Sweden and Finland to NATO. Ninety five senators voted to include Sweden and Finland in NATO, with one senator voting against the accession on Aug. 3, according to the New York Times. The U.S. is the 23rd country out of 30 NATO members to ratify the expansion.

Canada, UN to purchase $40 million worth of grain storage equipment for Ukraine. The Food and Agriculture Organization of the United Nations’ initiative will allow storage of an additional 2.4 million tons of grain in 2022-2023. The Ministry of Foreign Affairs of Canada will finance the purchase of means for grain storage in 15 regions of Ukraine.

Pentagon dismisses Russian claims of HIMARS destruction in Ukraine. Todd Breasseale, the Pentagon’s acting spokesman, denied the reports that Russia had destroyed six U.S.-made HIMARS, about half of the number sent to Ukraine. “We are aware of these latest claims by (Defense) Minister (Sergei) Shoigu and they are again patently false,” Breasseale said.

Sky News: UK plans to lend $3.6 billion to Ukraine. Nadhim Zahawi, the UK’s chancellor of the exchequer, has written a letter to other ministers, supporting a request for a loan from UK Export Finance. If approved, the funds will be spent mostly on military contracts ($2.8 billion), and the rest will be used to finance reconstruction projects.

UN announces fact-finding mission to investigate Olenivka tragedy. UN Secretary-General Antonio Guterres said the UN hopes that independent experts will be given access to all the necessary data and “find out the truth about what happened.” The attack on Russian-occupied Olenivka, Donetsk Oblast, killed 53 Ukrainian prisoners on July 29. Russia blamed Ukraine for the attack but presented no proof. Ukraine and its Western partners say that Russia organized the Olenivka attack.

A unique mural called “Do Peremogi” (Until Victory) appeared in Vilnius, Lithuania in late July thanks to a team of Lithuanian, Ukrainian and Estonian artists. The mural - some 200 sq. m in size - was produced on a building that was meant to become the symbol of Russian might. Instead of that, it is now the symbol of Ukraine’s will to resist.

The mural depicts Tatiana Drobotia - a volunteer from Zaporizhzhia, working in a local Palyanytsia volunteer center. The photo was taken by a local photographer Olena Tytarenko, in an improvised studio, and a workshop where the volunteers produce supplies for the Ukrainian army. The photo caught the attention of Lina Šlipavičiūtė, a Lithuanian muralist who attended Olena’s exhibition in Vilnius. The Lithuanian artist assembled an international team to transform the picture into a unique mural and a political statement. “We chose a very specific spot - the so-called Moscow House in Vilnius, a construction site in central Vilnius that was being developed by the Russian government, but was deemed to be illegal in the end. We wanted to turn it into a symbol of Ukrainian will to resist and the love of freedom we see every day in Ukraine,” Šlipavičiūtė told the Kyiv Independent.

The funds needed for the project – 13,000 euros – were raised by 500 Lithuanian people in just a few days. Check the mural here.